Tile Shower Goes Above and Beyond in Caldwell County 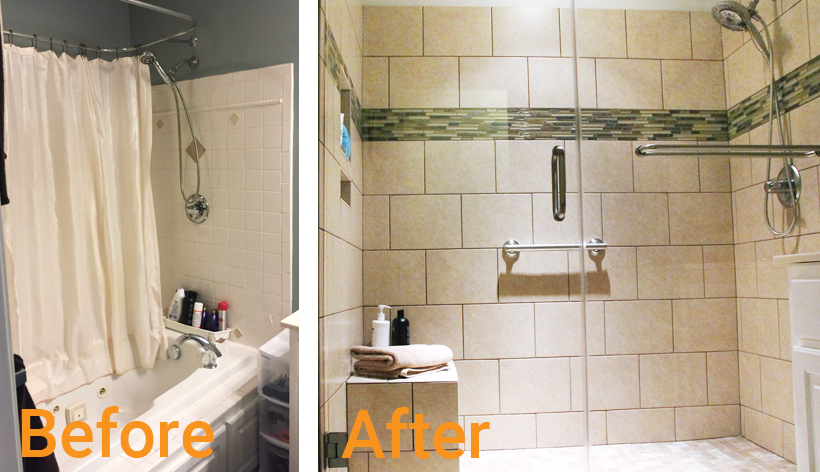 The Leonhardt’s master bathroom was practically new, but they were not pleased with the design of the bathtub/shower unit. 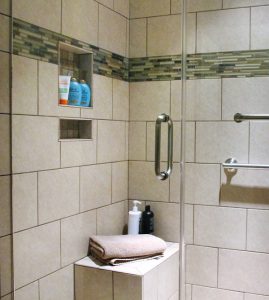 The original home owners had installed a drop-in jetted tub with a tile deck surround, a shower head in the tub area, and a rectangular shower curtain rod suspended from the ceiling. Our clients decided to avoid the jetted tub because black mold had formed in the pipes and spewed out at them when they filled the tub. Whenever our clients used the shower, the shower curtain would suck inward on them—an annoying phenomenon called “the shower-curtain effect”.  In addition, there was no niche in the shower area for toiletries, and water damage was beginning to show up on the tile.

Vision Design Build Remodel replaced their tub with a large 42” x 72” tile shower. The spa-like shower features frameless glass doors, a built-in bench, a niche for toiletries and beautiful tile that coordinates nicely with the original floor tile. Best of all, we used the Schluter®-Shower System as the foundation for the Leonhardt’s shower. This system guarantees their clients a leakproof shower. Read more about the benefits of this system and consider it for your bathroom remodel.

“By far, this remodel was the best experience that I have had with any company in any business in my adult life.”

“My wife and I both run large projects at the hospital. So we’re used to doing online research, carefully checking reviews, and then paying for high quality. When we decided to remodel our shower, the first thing we did was visit the Better Business Bureau website and we also searched online for bathroom remodelers in Caldwell and Catawba County—keeping our eyes out for complaints.

We finally narrowed it down to five companies and contacted each one for a consultation and a quote. The consultation we received from Cody at Vision Design Build Remodel was the only one we had to pay for, but we liked the way Cody handled things. He described to us in detail how he was going to make it all work with the Schluter system. He oozes confidence—we felt we could trust him completely and we were right!

Cody’s quote ended up being the lowest—I was shocked! Some of the quotes we received were out of this world. We checked his references, noticing that his clients all said they would hire him again. I googled the Schluter®-Shower System and it sounded great. After two months of very careful consideration, we awarded Vision Design Build Remodel the job.

The entire construction process was smooth and enjoyable. We appreciated Cody’s suggestions about the color of the shower tile—that we shouldn’t try to match the existing floor tile, but instead choose a color that blends. My wife is thrilled to have the shower bench that makes shaving her legs easier. Our mirror never fogs up, and the shower doesn’t steam up the entire bathroom anymore. The special Aqua Glass coating means no spots on the glass. Cody came often to update me on the progress and he installed the Schluter®-Shower System himself. There was not one snafu, not one surprise…except for some extras that we didn’t pay for. Now whenever my wife and I travel, we miss our shower back home.

We will definitely hire Cody again in the future—next time to build us a screened porch.”

Be sure to visit Guild Quality’s third party survey to read more comments by Paul Leonhardt.

At Vision Design Build Remodel in Lenoir, North Carolina, we take your home building project from start to finish—including all design and construction. As a local contractor, we are neighbors and friends to many of our clients and must maintain a strong set of core values. We possesses the integrity, experience, knowledge, and commitment to build kitchens, bathrooms, decks, and custom homes for the way you live now without losing sight of the future. When you build a new home or remodel your current one, it should meet your needs for many years to come.